MULTI The next Call of Duty game is Black Ops: Cold War

Moment to moment game play can be near impossible to replicate on both, but on average it seems like the XBSX has more frame rate drops. Between this and DMC, looks like the PS5 favors 120hz output games a bit better. A Dirt comparison will be nice next.

I think the Series X will exhibit an advantage in memory intensive scenarios, such as when RT is enabled. Targeting 120fps at a lower resolution likely favors higher gpu clocks, and therefore the PS5 takes the lead there.
Last edited: Nov 15, 2020

TL;DR both are virtually identical. PS5 has a very slight average fps advantage in the 120hz mode and XBSX has a 0.01 FPS advantage in the 60 FPS RT mode. Both seem to run at the same resolutions in every mode.

PS5 version has a slightly better frame time and has slightly less torn frames when targeting 120fps, but lacks VRR support for now. Performance at 60fps w/ RT AO is pretty much the same across both consoles. It also has, so far, the best Dualsense support after Astro's Playroom. Great job by Treyarch.


After a recent, mysterious patch, Call of Duty: Warzone runs in 120fps on Xbox Series X as opposed to PS5, where 60fps remains the only option.

After a sneaky update enabled 120fps support in Call of Duty: Warzone on Xbox Series X, the game now runs better on Microsoft’s console than PlayStation 5. That’s rather surprising considering that both gaming devices possess enough computing power to support higher frame counts, with Xbox Series X only being slightly more powerful, but the difference is not so dramatic to justify a doubled frame rate on the premier Xbox machine.

According to the initially revealed specs, both Xbox Series X and PS5 have fairly similar AMD Zen 2 CPUs clocking at 3.8 GHz and 3.5 GHz, respectively. The biggest difference is in graphical power, as with Microsoft’s next-gen console featuring 12 TFLOPS against 10.28 TFLOPS for PS5. It has already resulted in select next-gen titles running in native 4K on Xbox Series X, and in upscaled 4K on PS5.


As reported by Gary_BBGames and other players on Reddit, the recent patch for Call of Duty: Warzone, which was released by Infinity Ward on all platforms, added 120fps support for the Xbox Series X version. Suspiciously, this particular change is not mentioned in the patch notes. According to enthusiastic comments, the battle royale title now runs significantly better with a clear difference from the Day 1 state. On PS5, the situation remains unchanged, with 60fps being the top performance even after the recent update. This might be due to the fact that there isn’t a specific version of the game for PS5. Warzone is only available on Sony’s next-gen console via backward compatibility with PS4, which basically means that it’s a current-gen version running. In cross-platform matches, this difference could potentially give Xbox Series X owners an advantage over their PS5 opponents if the former also own TVs or monitors with 120Hz refresh rates.

While Call of Duty: Warzone is taking advantage of Xbox Series X unprecedented power, the latest installment in the series, Call of Duty: Black Ops Cold War causes Microsoft’s next-gen console to crash. It might be due to the fact that there’re two versions of the game that can be installed (for a slightly different price). Both of them, however, result in the next-gen console completely shutting down. Players report that crashes can be caused by installing the next-gen version on an external HDD with an obvious solution of reinstalling it to the internal SSD, and this time-consuming method has already proved its efficiency.

Judging by the fact that the 120fps mode became available in Call of Duty: Warzone on Xbox Series X in a small post-launch update, the potential next-gen version of the game for PS5 will likely receive a similar treatment. There isn’t a single word on whether this option will be available at all, but the tight competition between Microsoft and Sony will likely result in a 120fps support in Warzone on PS5 sooner than later. Still, it is weird to think that the option wasn’t advertised on Xbox Series X at all - and is currently completely absent on PS5.


TheThe secret heart of Treyarch’s Call of Duty games since 2008 has always been Zombies. The wave-based survival mode is equal parts silly, challenging, and endlessly repeatable. But in the 12 years since it was first released, Treyarch has added way too much to the mode. 2018’s Black Ops 4 was so complicated that the features distracted from the fun. I spent more time watching YouTube videos trying to figure out the maps than I did running around the game itself.

But in Black Ops Cold War, Treyarch has brought the focus all the way back to zombies and how you kill them.

COURSE CORRECTION
Black Ops Cold War doesn’t reinvent the Zombie-mode wheel. It keeps most of the basic ideas that Treyarch has added to the mode over the last 12 years, but simplifies them down to their most fun elements.

The best example of this comes from Black Ops Cold War’s map, which takes the original Nazi research lab from the first World at War Zombie map and expands it into a modern, much larger, Zombies experience. This map, called Die Maschine, still has plenty of hidden secrets, but it leads players to things like the power switch, which you need to turn on to buy perks, and the Pack-a-Punch machine, using simple objective markers rather than keeping them hidden. This makes the map feel more focused than Zombies maps of the recent past. Everything I do in the map now feels like it’s in service of my survival. 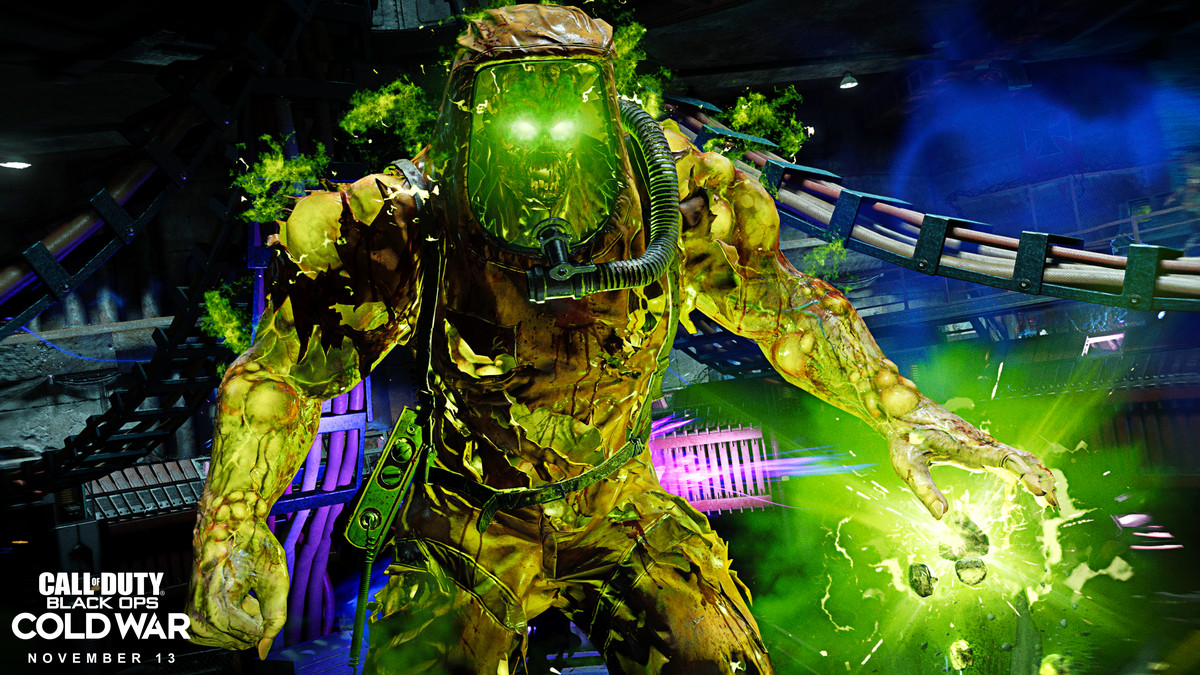 Image: Treyarch/Activision
More importantly, killing zombies in Die Maschine is a tremendous amount of fun. The environment is split between an upper level, which is a snowy landscape complete with rocks and debris that make it perfect for dodging zombies, and a lower-level laboratory, full of tight hallways that are easy to get ambushed in. While previous maps made the zombies feel like an afterthought to the Easter eggs, one of my favorite parts of Die Maschine was just kiting hundreds of zombies around the map like the Pied Piper, but with a laser gun instead of a flute.

Rather than the microtransaction-fueled upgrades of Black Ops 4, Black Ops Cold War’s upgrades are earned by surviving waves. When you’re actively upgrading, the rewards feel direct and important. Upgrading a perk like Juggernog can give you more health, while upgrading ammo mods — which give weapons elemental effects — can increase your damage or stun zombies when they get shot. For every new upgrade I bought, I could actively see myself lasting more and more rounds.

NECESSARY UPGRADES
Zombies now has a weapon rarity system that should look pretty familiar to anyone who’s played an MMO or RPG. Weapons come in tiers of rarity from Common, to Uncommon, Rare, Epic, and Legendary. Each rarity upgrade does more damage and comes with a random selection of attachments. The mode’s signature mystery box — which spits out random weapons — can give you weapons of any rarity, and it’s more likely to give you higher tiers later in the game. 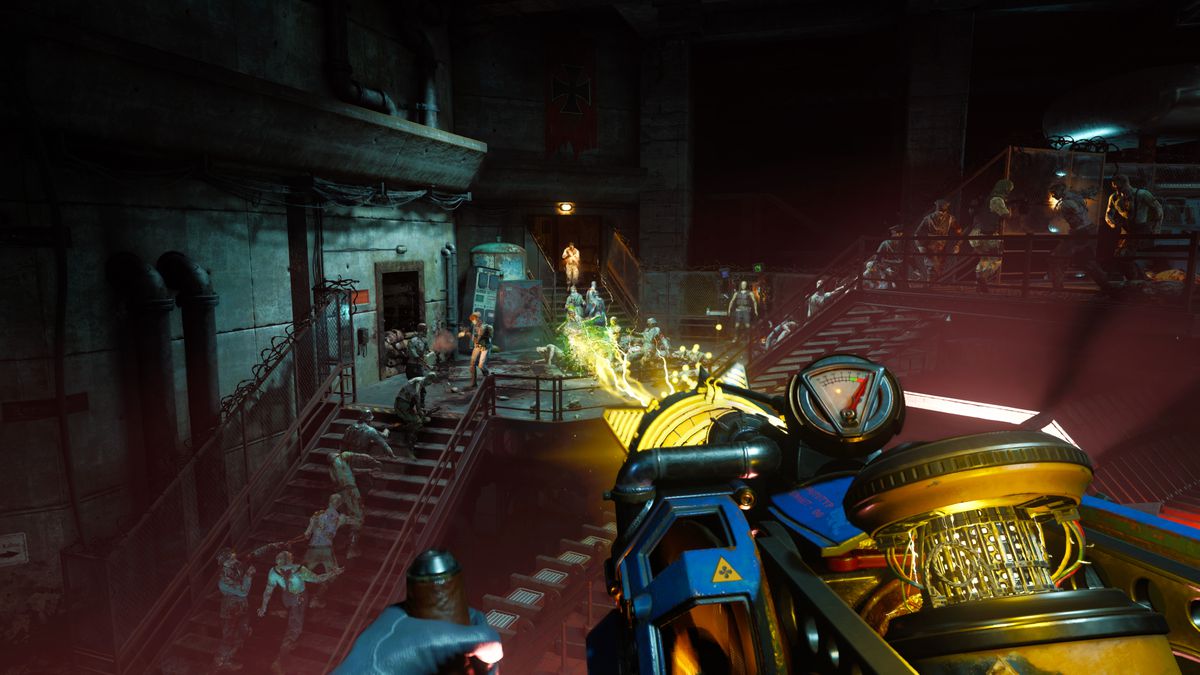 Image: Treyarch/Activision
Black Ops Cold War also lets you bring in weapons from your custom multiplayer loadouts for the first time. These custom-fitted guns, complete with your favorite attachments, start at a low power level but can be upgraded in each match. That means you can just use your personal weapons and keep upgrading them rather than using the guns you might find on the map. Even better, everything in Zombies is now connected to Call of Duty’s other modes. That means the experience you gain in Zombies carries over to your multiplayer rank.

This new weapon rarity system adds a strong sense of progression to Zombies. Rather than dealing with the binary of good guns and bad guns, there are now shades of gray between each gun. In one match I got a semi-automatic rifle, and while I might have passed it by in previous games, its Legendary rarity convinced me to send it through the Pack-a-Punch machine and I ended up using it for dozens of rounds. It saved me dozens of times and let me cut through early-round zombies way better than I could have with a Common assault rifle. It also got me to try a different weapon than I normally would in the mode.

On their own, all of these things would have been significant improvements over the Zombies modes from the recent past. But when added together, they feel like a massive leap forward for the whole mode. By streamlining the overly complicated mechanics this time around, Treyarch is placing the focus back on the mode’s bread and butter: killing zombies.

So X has a slight performance advance in RT mode but it may end up bricking your console.

Chandoo said:
So X has a slight performance advance in RT mode but it may end up bricking your console.

Series X owners probably weighing in on if the advantage is worth it lol
Click to expand...

That advantage was due to a bug, restarting checkpoints makes the game locked 60FPS on PS5. Possibly a memory leak but I'm not sure about it.

Really weird. It seemed like a really solid effort, but these game crashes are definitely annoying af. Hoping Treyarch can fix this soon. Been looking forward to playing this on PS5.