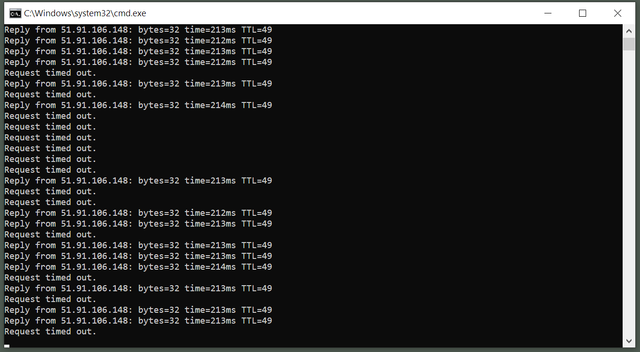 I just called 1236 (for a different issue) - the IVR has a prompt saying there's a technical issue.

Nayatel and other ISPs, rejoice (if they've switched providers).
S

Yeah, that was a temporary issue.

Btw, those who got upgraded to the new packages with a slight bump in the price, these are unlisted packages as a promotion for us.

There isn't any time limit on these (as of yesterday).

So - for instance - I'm getting 30Mbps for the price of 20Mbps. If I change my package, I won't be able to come back to this.

Yes the download speed + browsing issue is fixed now. But pings now dont go as low as 138ms to that ip.
but instead stays between 166min and 200max. This is new aswell.

Bro ptcl dont have a 20mbps package listed on their website! They have 15,25,50,100.
And i remember this is the same package list from like 3years atleast, probably more.
S

www.ptclflashfiber.com has the newer packages.

Messed up websites, I know.

Doing speedtests on Jazz is tricky - if you pick their own server, you get unthrottled speeds (which is your network link). But the real speeds are displayed when you pick another server.

Not saying you're lying - there are some places where you do get higher speeds off-network, but I know of several places where tests to their own servers yield 120Mbps but off-network? It drops down to 50 Mbps or so.

Which is still plenty, but then, you're bound by GBs.

Also, try calling 1236 and ask them what other packages they have. I don't mention that I have fiber but they never stopped me... so it's worth a shot. What's the worst that'll happen? They'll just say "no".
Reactions: Engr Zain Raza

Yeah i will try calling them to see if they can give me some sort of promotion. But i have tried that on twitter and he said "if there is promotion for you, you will get sms+call+email" if i didnt get any of those then there is no promotion for your number. He even checked and told me to keep checking our website for promotions and updates.
S

Can you share which servers you're pinging to? Remember that both Jazz and PTCL have their own routes - sometimes they overlap, sometimes they don't. You can tell from the AT&T test.

Also, it's always a good idea to test to local servers (off-network, but within the country) since networks don't always have control over other networks... unless they change their routing.


Engr Zain Raza said:
Yeah i will try calling them to see if they can give me some sort of promotion. But i have tried that on twitter and he said "if there is promotion for you, you will get sms+call+email" if i didnt get any of those then there is no promotion for your number. He even checked and told me to keep checking our website for promotions and updates.
Click to expand...

I got an SMS with the bill increase and the package change, so...

unless speedtest server is bad and cant provide full speed. i dont see a reason to be not getting full speed anywhere in the world with pings less than 350ms. Those big companies cant be having bad speed test servers i dont believe that. its probably my ips (ptcl) limiting bandwidth where it wants to. if server has good bandwidth only thing that should matters is latency. but that becomes an issue if your connection speed is like 500mbps.

i have only 3.2MB/sec download speed and without using multiple connections i cannot get full speed.
Just tested and i got burst of 800KB/sec and then it went down to 145KB/sec XD and is staying between 145-330 fluctuating insanely xd
S

The internet works by connecting multiple networks. If one network is choked, then it'll impact every other network in the chain. That's just how it works - bottlenecks are everywhere. You can have pings of 1000ms and still get full speeds - or get super low pings but have a choked server (had this with a Lahore server on nperf.com... which has been delisted).

It doesn't mean the company sucks - it could be another player in between ruining the thing. Not much you can do except use a VPN - which may or may not work.

Also, it could be that your exchange is choked if you're not getting full speeds regularly - complain to PTCL, note down the date and complaint number, wait for their TAT, complain again and tell them you're now emailing PTA. Then share the date/time/complaint number with PTA.

Although, keep in mind, these speeds are "up to" speeds, but if you see multiple tests from different servers around the world and they all suck (including servers from Pakistan and the UAE, Singapore, UK, France etc), then day so.

A 1 or 2 Mbps difference is marginal... Keep that in mind. No one can *guarantee* full unthrottled speeds beyond their networks
E

Many channels on the PTCL's Smart TV are lagging alot lately. Started happening 2-3 days ago. Anyone else also facing it?

Don't fret. Read my post above: there was a server in Lahore that gave me <10ms ping but the speeds did NOT cross 10mbps.

Whilst I manage to score full speeds in most other services.

speedof.me doesn't always give me full speeds - because they use a CDN hooked up in Fujairah and that link is choked sometimes.

My previous IPTV service would choke WITHOUT using a VPN (because the link beween PTCL and the server was heavily saturated or bottlenecked, so the only way to bypass that was to use a VPN and reroute the traffic).

This is how the internet works - an interconnection of networks. When they find a better route, things improve.

Case in point: Transworld did not have a better connection to Microsoft's Azure CDN in the Middle East (PTCL did), so they would default to Singapore each time. It seems they now have a more direct route to Microsoft's servers.

However, there are times when I'm getting ~50ms on OneDrive but speeds don't go beyond 200KB/s - so I have to use a VPN to bypass this choke. It doesn't happen all the time - it's just that the networks between PTCL and Microsoft are faltering, or maybe the bandwidth of a computer in between is fully choked.

Lower latencies do NOT always guarantee faster speeds (see my OneDrive example above). Some things are just not in your ISP's control.
S

EliTuS said:
Many channels on the PTCL's Smart TV are lagging alot lately. Started happening 2-3 days ago. Anyone else also facing it?
Click to expand...

There are a few ISPs with IPTV apart from PTCL. I've only used Nayatel's so I can comment on their service, and I've seen a few youtube videos of Stormfiber's TVNation.

Anyone else know how Optix and TW are in terms of functionality?

PTCL's streaming quality isn't the best, they have few HD channels, have several that rewind, have paid VOD and if you're lucky, you might find EPGs for desi channels.

Nayatel does NOT have EPGs, they have timeshift on some channels but you need to select by the hour (not by the program because there's no program information on any channel vs. PTCL where you do get program information on a number of channels), channel switching wasn't as fast as PTCL's, and HD channels... they had an issue at their backend where the sound would be fine but the video was playing back at a slower speed (either this was an issue with my MiBox or something else because this happened on ALL HD channels except one or two... I didn't complain since it was a free trial), and they have free VOD.

The interface? Erm... not the best for both services. It's like they made an app in Microsoft Paint. PTCL doesn't use 1080p resolution/bitmap, Nayatel has a primitive interface.

I know Stormfiber have a TV guide on many, MANY channels - but that's all I know.
Reactions: arslanejaz33

shaheerk said:
Don't fret. Read my post above: there was a server in Lahore that gave me <10ms ping but the speeds did NOT cross 10mbps.

Whilst I manage to score full speeds in most other services.

Lower latencies do NOT always guarantee faster speeds (see my OneDrive example above). Some things are just not in your ISP's control.
Click to expand...

Whatever the reason its isp job to give us a unthrottled uncongested routes to anywhere in the world! if they cant even do that then they are probably doing nothing to improve our connection withoutside world. Imagine the video call quality while getting 40kb/sec just as an example due to bad router and CDN and blah blah blah and other stuff which i dont care about cause i am not running an isp. I pay for internet not shiternet. stop defending ptcl and other isp. if they suc then they suc admit that!
S

Engr Zain Raza said:
... and blah blah blah and other stuff which i dont care about cause i am not running an isp. I pay for internet not shiternet. stop defending ptcl and other isp. if they suc then they suc admit that!
Click to expand...

Maybe you need to read up and learn how the internet actually works.

A little knowledge is a dangerous thing.

The same can be said about software development - it's very easy for us to comment and criticize but when it actually comes to making things work without breaking other things, you'll know it's not as easy as 1, 2 and 3.

But since you're not interested, I'll drop the subject here and you can live on your own accord.
Reactions: arslanejaz33

like i said i dont care i am a customer i dont want throttling and bad routing.
just going from rawalpindi to karachi they are somehow adding 40ms
any isp can fix these issues, but they do it on purpose to save their bandwidth cost!
where there are real world issues like "Distance increasing latency" thats understandable.
But getting 280ms to Europe thats bullshit!

And 99% of the customers dont understand the terms you are talking about. So yeah try educating whole nation.
We are all wrong because we dont understand the plight of isps.
Do u even read the profit ptcl is getting every year vs previous year?
My whole point was they should "Improve services"...peace

Anyone here using smart tv on vdsl?
I applied for smart tv on 8th june and till today they are saying "feasibility issue"
The exchange guy of my area told me i have mailed to idk who and until he gives me permission i cannot install.
Is it possible that the cable operator in my area is running some sort of deal with ptcl so that people's only option is his pathetic cable tv which is 1. not working like 8 hours out of 24 hours and 2. worst quality.
Some people are using smart tv in my area according to the guy who called me from ptcl. he also said there is no issue here this is new exchange and supports smart tv. but the guy who he mailed to for permission isnt replying.
S