Following a 24-hour livestream on Twitch, Bethesda Softworks unveiled the next game set in the Fallout universe. It’s called Fallout 76, which refers to the vault where it takes place.

The teaser trailer, embedded above, includes scenes set inside a relatively well-maintained bomb shelter. The vault looks decked out for a party, with balloons and confetti all over. A sign says that the occasion is called “Reclamation Day.” A Pip-Boy makes an appearance during the teaser, but there’s a conspicuous lack of weapons of any kind. The entire setting looks extremely domestic, set inside a child’s bedroom and a family living space.

The only character shown on screen is a single vault dweller, donning a blue Vault 76 suit.

Kotaku reported that Fallout 76 will be “an online game of some sort.” Polygon has also heard the game will feature multiplayer.

A press release sent out by Bethesda said Fallout 76 is in development at Bethesda Game Studios for PlayStation 4, Windows PC and Xbox One.
Click to expand...


NaNoW said:
okey - so my "inside" sources say that its related to a fallout online experience..a kinda pvp , pve type game ..lets see how correct they are
Click to expand...

NaNoW, who correctly predicted the game would be a different type of Fallout experience (as shown above), has also said the following:

its gonna be in west virginia, basically a DayZ/Rust type of experience where you explore the wasteland and shoot mutants/ghouls/radscorpions/whatever to scavenge stuff and build/improve your vault... but other players are doing the same, so you have to decide whether you want to team up with them or kill them and steal their loot. Last time I saw it, it was 100-ish players servers with persistency and permadeath, dont know if this was changed or not
Click to expand...

Please also write down that I correctly predicted

NaNoW said:
okey - so my "inside" sources say that its related to a fallout online experience..a kinda pvp , pve type game ..lets see how correct they are
Click to expand...

much earlier than anyone else..and while most media outlets were talking about fallout on switch

At least it isn't a remaster.

i hope its not a bloody MMO or anything near online game as predicted by matty and oxhorn . lets wait for 10th june
Last edited: May 30, 2018


When Bethesda announced Fallout 76 with a teaser trailer this morning, promising more information at E3, it was easy to assume that the new game would be a traditional single-player role-playing game. But Fallout 76 is in fact an online survival RPG that’s heavily inspired by games like DayZ and Rust, according to three people familiar with the project.
Those people, speaking anonymously so as not to damage their careers, confirmed that Fallout 76 is an experimental new entry in the longrunning post-apocalyptic series. When Bethesda first teased the game on Tuesday morning, fans and pundits speculated that it might be a Fallout 3 remaster or a New Vegas-style spinoff in a new location, but as Kotaku reported that afternoon, it is in fact something
Click to expand...

completely new and completely different. The teaser might lead Fallout fans to believe that this is a traditional entry in the series, but according to our sources, that’s not the case.
Click to expand...

so my sources were correct ?

Hahaha you're very proud of these sources, aren't you

NarutimateTaha said:
Hahaha you're very proud of these sources, aren't you
Click to expand...

The Land of Hospitality

i hope its not a bloody MMO or anything near online game as predicted by matty and oxhorn . lets wait for 10th june
Click to expand...

If you want to get into fallout then atleast play FO3 first . Story isnt connected but the LORE is . if you just want to play for fun and shoot then yeas fallout 4 for you . for me the best fallout has to be new vegas .

FO3 and New Vegas has much better RPG element than FO4. I enjoyed those more as compared to FO4.
And no story is not connected.

this will be super fun

No crossplay, because "Sony is not as helpful as everyone would like

Todd Howard is annoyed by Sony's stalemate attitude: "We would love to do that, but right now that's not possible."
Click to expand...

Not sure why Sony is being such a crybaby about this. Do they want to increase PS+ subscription to implement this? Its not like PS4-only gamers will have a choice, they'd have to subscribe either way.

[h=1]Fallout 76’s Todd Howard: No cross-console play because ‘Sony is not as helpful as everyone would like.’[/h] 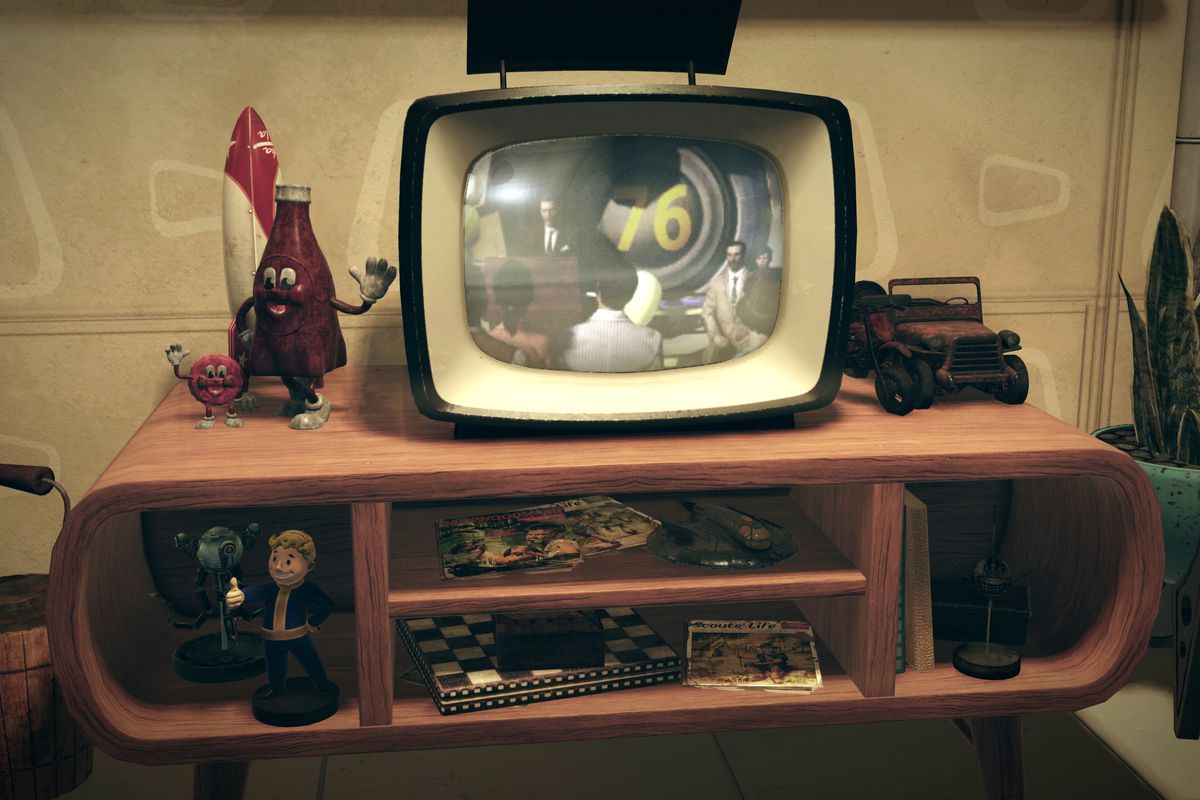 Todd Howard, the Bethesda Game Studios director and creative leader behind the forthcoming Fallout 76, bluntly called out Sony when a German publication asked why that game wouldn’t support cross platform play.
“You cannot do cross-play in 76,” Howard said, according to GameStar.de (via CNET). “We’d really love that but right now we can’t. Sony is not as helpful as everyone would like.”
We reached out to a Bethesda Softworks representative for additional comment and were told the publisher had nothing more to add.
Fallout 76 is an online-only multiplayer game launching in November for PlayStation 4, Windows PC and Xbox One. Microsoft, more two years ago, opened up the Xbox One platform to cross-console play beginning with Rocket League, while Sony held firm that the PlayStation 4 would not participate in cross-platform play with other consoles. Last year, Sony said it was holding out of allowing Minecraft players on PS4 to mingle with users on other consoles, citing its inability to guarantee a safe experience for all of its users, especially for a game with such a young installation base. Phil Spencer, the Xbox division boss,dismissed Sony’s complaint out of hand.
In September 2017, a “configuration issue” at Epic Games allowed Fortnite players on Xbox One and PS4 to briefly mingle; Epic quickly corrected it, and the two player populations have been separated since.
Epic Games announced at E3 2018 that the ultrahot Fortnite: Battle Royale was coming to the Nintendo Switch, and it launched on June 12 for that platform with 2 million downloads on the first day, reigniting the cross-console play question. Making matters worse, gamers soon discovered that if they had used their Epic Games account to play Fortnite on PS4, theywere locked out of using it on the Switch or Xbox.
Microsoft and Nintendo ramped up the pressure on PlayStation with a remarkable joint advertisement on June 21 touting Minecraft’s compatibility between the Nintendo Switch and Xbox One.
Last week, Shawn Layden, the president and chief executive of Sony Interactive Entertainment America, told Eurogamer that the company was “looking at a lot of the possibilities,” and would soon arrive at a solution “which will be understood and accepted by our gaming community.”
Bethesda Softworks also has had a somewhat fractious relationship with Sony. The publisher launched its “Creation Club” suite of mod support for Fallout 4and The Elder Scrolls 5: Skyrim Special Edition for Windows PC and Xbox One in mid 2016. By September of that year, Bethesda still had not rolled out the service on PlayStation 4, and appeared to give up,blaming Sony’s approval processes. A month later, the two sides patched up and Creation Club was rolled out to PS4 users.
You must log in or register to reply here.
Share:
Facebook Twitter Reddit Pinterest Tumblr WhatsApp Email Link

Necrokiller: Can I get live feed of CerebralTiger's reaction before I hit checkout? 3 minutes ago
Chat 2
Top Bottom