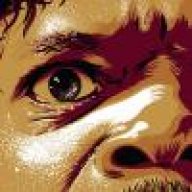 XPremiuM: No surprise there. These days, most "console-exclusives" end up on PC sooner or later... Today at 2:03 PM
Chat 0
Top Bottom